Books and games, games and books. If we brought all the ones we love, Goblin would be riding a few inches lower in the water. 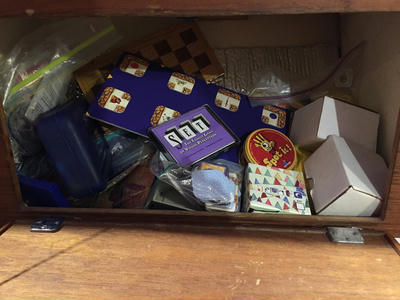 Owen, our resident game kid, had the tough job of deciding which games to bring aboard, which to tuck into storage, and which to give away. He sorted for which games could be packed down small, be fun even after playing them over and over, good for kids and adults to play together, and could be taught quickly to new friends. Not all the games fit all these criteria, but I think he managed a good mix. Together we unboxed the games and sorted them into ziplock bags. Card games are stored in plastic travel soap boxes.

Owen’s choice for games are listed below. He started some of these as young as age four but all are recommended for adults as well. Kinsley is starting into Blink, Spot-It, Carcassonne and Labrinth, hopefully we have another game lover in the making. 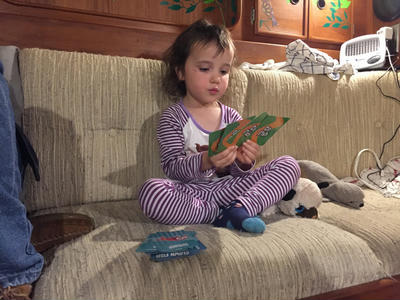 A speed game, matching colors, shapes, and numbers. You can play once through the deck in less than two minutes or keep going until one player runs out of cards.

So many ways to play. We’ve played this as solitaire, a speed game, and taking turns.

You’ll be more than a little cross-eyed by the end of this one. The directions aren’t too clear but once you get the hang of it, this makes a great game to play solo or with a group.

Fun for the geeky crowd. We play with two players but it’s better with a group. There’s lots of reading involved and some of the humor is better kept away from the younger audience. This one requires more room to spread out than the other card games. 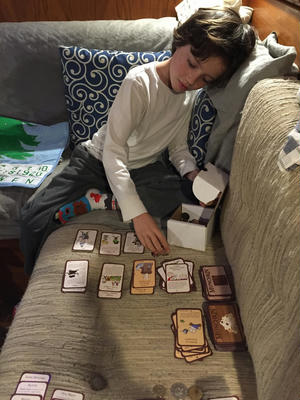 The most sprawling of the games which made the cut onto the boat. You build the board with tiles as you play, most often we spread across the floor rather than trying to fit on the table.

Part maze, part scavenger hunt. We play this one both cooperatively and competitively. You can set the length of the game by deciding how many treasures to find, or challenge yourselves to find them all.

An old Ravensburger game that still gets lots of play. Players trade jewels, trying to match patterns with as few extra jewels as possible. The glass jewel pieces are irresistible. 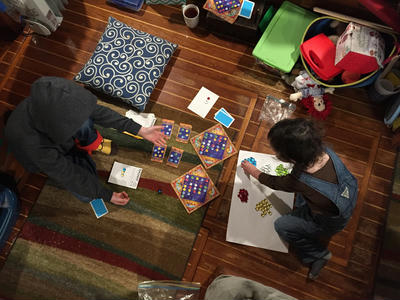 Super easy to learn but allows you to build strategy over time. Although the board is larger than anything else in the game cabinet, it keeps the pieces from shifting around and is completely worth the space. As an added bonus, Kinsley uses the board and pieces to make pictures. 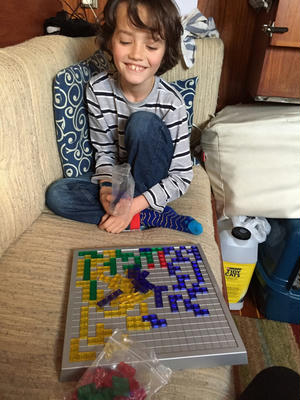 Our newest find and so very much fun. You gather jewels, build mines, and try to woo sponsors to win. The rules scale for two to five players and involves very little downtime. 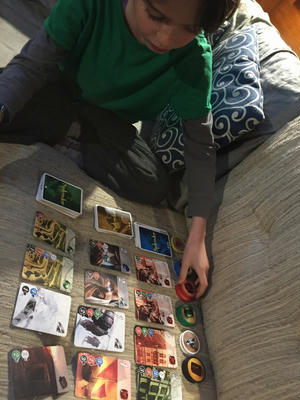 Living on land we had these games in a traditional format. The full games had so many pieces and they wouldn’t have tolerated boat movement well so we transitioned to electronic format. All three are European games and designed for older players. The rules take a while to learn and all three rely a good bit on random chance, rather than pure skill and strategy.

I’m sure some of these will change over time, swapping one game out for another as space allows, but for now we’re keeping ourselves entertained.