The water stays on the outside of the boat, or at least that’s the theory. Unfortunately for us, downpours have been continuing to make their way into Goblin. Specifically, the area around the nice, decorative box that encloses the mast down below was getting wet. In an attempt to find out where the water was coming from, Alex removed one screw and promptly had to deal with nearly two gallons of water fountaining out into the salon. Clearly there was a problem. We have an in-mast mainsail furler, which rolls the mainsail up inside the mast. This means there is a long slot along the back of the mast where the sail goes in and out. Wind blown rain gets in there and the sail funnels even more in. Water is supposed to come down inside the mast itself, down to where the mast sits in the bilge, it isn’t supposed to spray everywhere.

Once the geyser was dealt with, thank you duct tape and funnels, we waited for a dry day and removed the box surrounding the mast. The damage to the wood on the inside made it clear that this was not a new problem. On the front of the box, the side with vines on the outside, the water had damaged all the layers of plywood up to the final layer which was mostly protected due to the varnish on the outside. Other areas had various degrees of rot and damage as well.

The project to remedy this was two parts, how to stop the water from coming in with such volume and how to repair the stability of the wood itself to prevent future damage.

Lots of poking and flashlight work was rewarded with an answer to the first problem. For some reason, the wires for the furler motor were run down the inside of the mast and then out above deck to run down the outside of the mast to the bilge. Superhighway for the water! The best solution would be to feed the wire all the way down and drill a new exit hole in the mast below the floor of the salon. Unfortunately, the wire itself is so stiff that it couldn’t be fed back into the mast. Long term, we’ll end up replacing the wire. Short term, we filled in the hole around the wire to prevent further water intrusion.

For the box itself, there was a good bit of repair called for. Step one was removing all the rotted wood from the inside. Kinsley cheerfully took the role of scraper and learned all about gentle pressure as she removed the rot layer by layer, with maybe a bit of adult assistance. 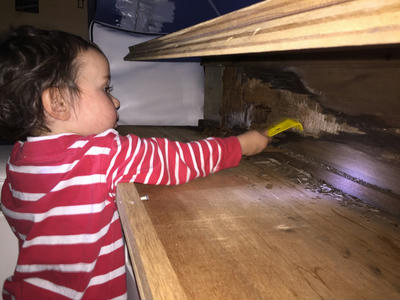 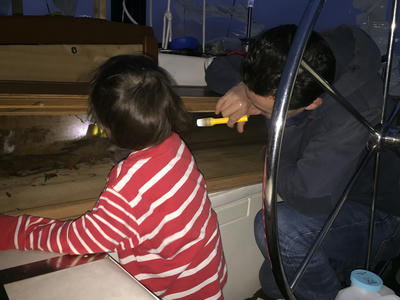 After the box was down to solid wood, Alex began mixing and applying epoxy to the interior, as well as epoxying in a board to add structure at the base where the wood was worn thin. 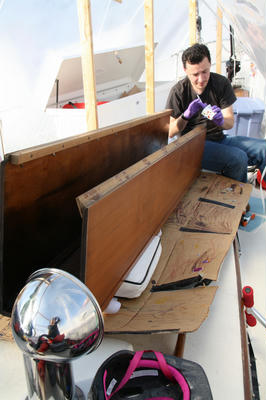 Epoxy in the winter, that’s a challenge. It needs to be at least 60 degrees to set correctly and a string of cloudy days meant our greenhouse deck wasn’t getting up to temperature. Eventually the weather cooperated and the inside of the box was finished. 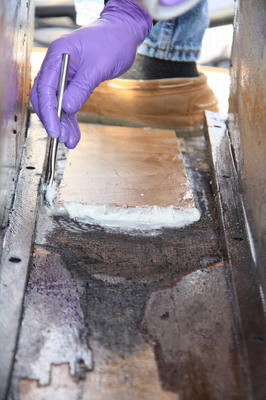 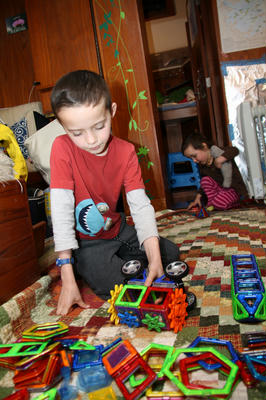