What do you get when rewiring a boat for the third time? Spaghetti.

Alex has been slowly replacing old wiring throughout Goblin with the goal of eventually updating the entire electrical system. This weekend we installed a new battery charger, which meant another round of tackling spaghetti. 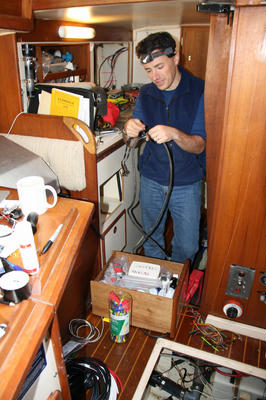 Extra fun, a lot of the wiring for Goblin was put in before the woodwork was finished. Unfortunately, this means there isn’t a way to reach all of it without ripping the boat apart, not an option we want to pursue. Instead we took the contortionist approach. I had no idea I could fit my upper body into the drawer under the workbench but it turns out this is a very useful discovery. 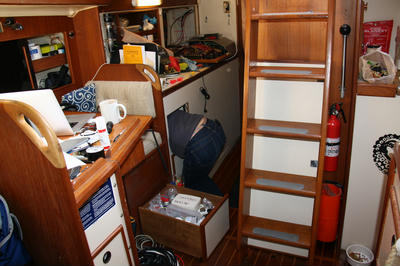 The worst of it is the run from the engine room, under the floor, up behind the workbench, and to the electrics panel. There are tiny holes to thread the wires through that at best can be seen or reached, but not both at the same time. At worst, you just can’t get there from here. Meanwhile, the cockpit is piled with everything we need to move out of the way. 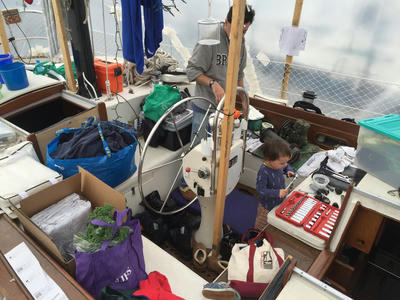 We removed piles of unconnected wires, ranging from the wiring harness for the previous generator, which got left behind when the generator was replaced years ago, to a pair of giant battery cables that spliced together behind the electrical panel with their other ends cut away from whatever they used to be connected to, hanging in the bilge. On the bright side, pulling out all the disconnected mess has made plenty of room for running new wires. We’re trying to be orderly about what we add, and Alex is making plenty of “next boat” notes about how to make wiring easier.

While Alex and I tear down and rebuild, Owen and Kinsley have been doing the same. The latest Owen creation is a sailboat, built out of parts in the tinkering kit Santa delivered. 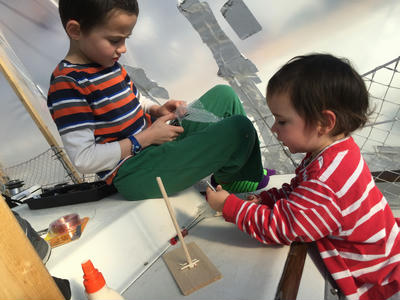 Out of everything he could make, Owen chooses a boat. Guess we’re doing something right. 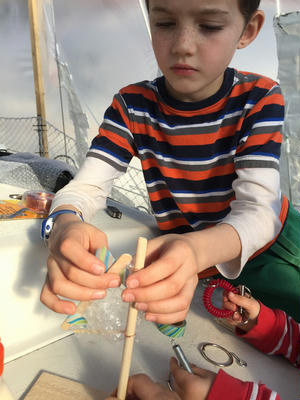