Owen tagged along with Alex on a work trip to New York leaving Kinsley and I alone for the day. I wanted to plan an outing that was right at her level since so often I feel like I’m tucking her into plans I’ve made for Owen. After hitting up our local library for a museum pass we were off to the Children’s Museum for the day.

No surprise, the subway ride was just as exciting as reaching our destination. We’re out an about on the T a few times each week and it hasn’t gotten old for Kinsley. Today she got to be in charge of elevator buttons, was able to ride escalators, and pick any seat she wanted. 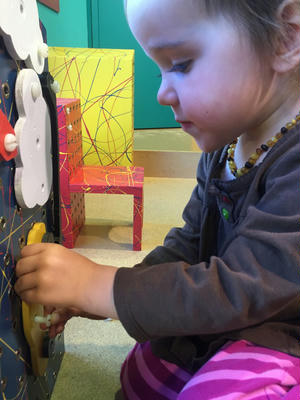 We arrived at the museum just after they opened and it was delightfully quiet. My memories of this museum are of chaos and noise so I was pleasantly surprised by the weekday morning calm. Kinsley had the climber in the lobby to herself for a long time. Even when we revisited the climber in the middle of the day it wasn’t especially crowded. Kins is still a bit short for some areas in it but she stuck with it for a long time. It was fun to watch a couple of older kids help guide her down when she announced that she wanted to get out. 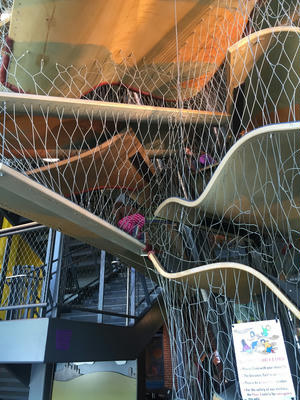 Kinsley speed was just right for this museum. We sped right past a number of the exhibits and spent long concentrated hours in others. Kinsley played for a long time with the letters in the Arthur exhibit, making up words on the blackboard and finding her K as often as possible. 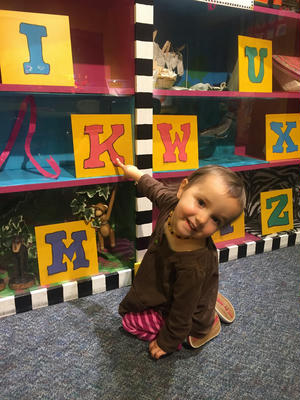 Monday’s are messy art days and Kinsley took the museum staff at their word. The idea was to make prints using items you could find in a kitchen. Kinsley was more interested in painting the objects and getting hands on with the paint. As a note, allowing toddlers access to bowls of paint, scoops, and small cups at the same time results in spectacular paint pouring practice. The staff member overseeing the area was encouraging all the parents to let the kids explore however they chose and so Kinsley spent half an hour pouring and scooping paint, as well as squeezing it through her fingers. 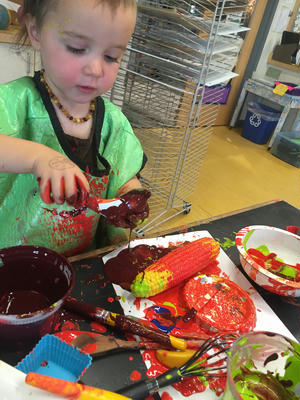 We touched onto less than half of what the museum had to offer so hopefully Kinsley and I will have a chance to return at some point this winter. I’m glad we had the chance to head out just the two of us. There were a couple of exhibits that would have been fun for Owen but, as much as I hate to admit it, he’s just too old for this museum now. Two to six years old seems to be the perfect age for this museum.