It took all summer but we finally managed to take the kids out into the harbor on Goblin. We were greatly delayed for a variety of reasons. I’d like to say it was all waiting on the insurance to finally come through, but that was only part of it. The other was the challenges that come with sailing your home. 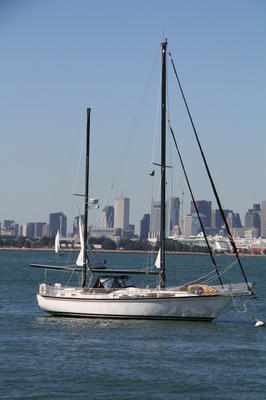 Insurance first. When the survey of Goblin was first completed it came with a long list of recommendations for what to clean, repair, and replace. Applying for boat insurance included submitting that piece of paper to the insurance company. They cheerfully replied with a coverage amount and the requirement that we fix everything on the surveyor’s list. Some needed to be completed before we could move Goblin from the Cape to Boston. Once those were completed we had a waiver to sail her to Constitution Marina before finishing the list. Until we could prove that we had checked everything off, we were had to stay tied to the dock. The list was finally finished in early September. 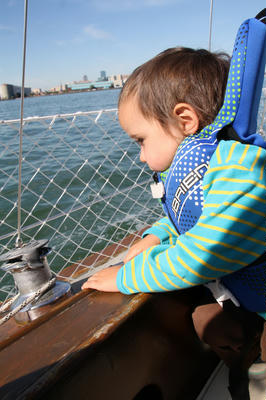 Then came challenge number two. Goblin isn’t a weekend sailing boat, she’s our home. Can you imagine needing to pick up and put away everything in your house before traveling? Secure every picture, pack up every toy, make sure nothing can be knocked off the shelves of your workbench. You know that dumping ground surface, the one where you place those things to deal with when you have the time? Yup, all that too. Now add in two kids, one with a constant stream of Lego projects and the other who seems to unpack everything just as you put it away. I’m sure we’ll get better at it, especially when we are making frequent short hops, but this time it took us on and off throughout a full day to feel like nothing was going to shake itself loose. 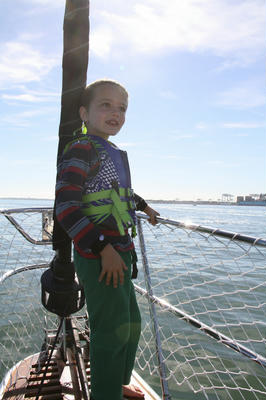 The day itself was lovely. The morning was calm, the kids were well behaved, and I managed to steer us out of the marina without hitting anything. The kids and cats hung out in the cockpit for most of the trip, a little thrown to see their home making waves, but all excited. Owen and I spent time on the bowsprit, just to prove that we could. Ferry wakes are especially exciting up there. Kinsley, on the other hand, preferred to peek over the stern at and watch us leave “milk trails” in the water. We motored to Spectacle Island in just under an hour. 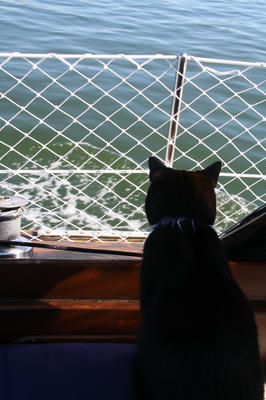 The island has a small field of mooring balls, a much nicer prospect than anchoring, and only two on the edge were taken when we arrived. I picked out one fairly close to the shore as a target and a second as a backup in case my steering was off. Alex headed to the bow with the boat hook. Nice and slow, nice and straight, and then the motor died. No motor, no sails up, and drifting through a mooring field with two excited kids bouncing in the cockpit. Alex immediately had visions of us grounding on the shore. He headed for the dingy, prepping to row a line from a mooring ball to Goblin if necessary. I went to the bow with the boat hook, figuring that, of all the places to have no power or steering, in the middle of a mooring field, far from other boats, on a barely windy day, was a pretty good place. We had some slight miscommunications which caused me to miss the chance to hook the mooring ball, darn short arms, but I passed the hook to Alex in time for him to catch it. Some creative rope work and Goblin and the ball were connected. We remedied that into a secure mooring once Alex was back aboard. 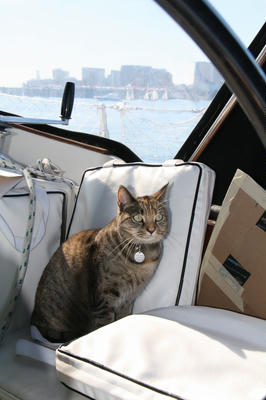 I have to give both Owen and Kinsley major kudos, they did everything we asked. They stayed in the cockpit, quiet and without questions, while Alex and I scrambled, and even continued to be patient while we changed plans from a picnic on the island to a lunch on board while we caught our breath and let our heart rates recover. The engine problem turned out to be exactly what we thought, some air in the line from replacing the fuel lines earlier. It had just taken much longer to work its way through than expected. Bleeding the air from the engine took care of it and we restarted and ran the engine just to be sure. 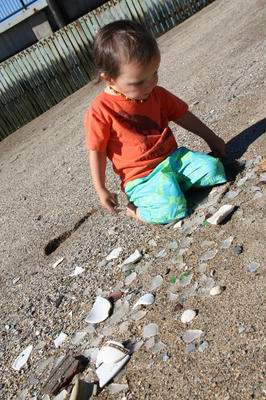 We spent a few hours on the island, Kinsley and I exploring the beaches while Alex and Owen climbed to the pavilion and worked through the Junior Ranger program requirements. Kinsley collected and sorted her treasures and was surprisingly ok with having to leave them all on Spectacle when it was time to go. 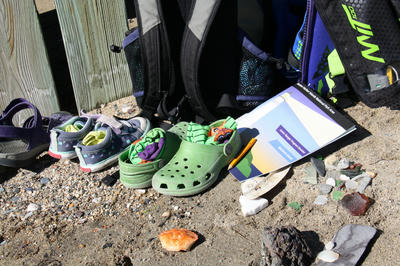 We motored back, though the wind had picked up and it would have been a lovely sail. There had been enough excitement, the kids were tired, and we were running much later than planned. I gave my heart another good workout by steering Goblin to the dock while Alex set bumpers and lines. We had help with lines from two people on the docks and got her into our slip without incident. We didn’t manage to clearly communicate where we wanted one helper to secure a line which added to the adrenaline spike of docking, but we made it. 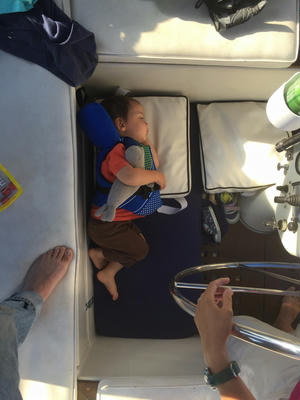 Post pizza dinner, Alex and I sat talking over what went well, what we wanted to do differently, and starting our checklists for predeparture and sailing, all while watching the eclipse. It might have taken us far too long to get off the dock, but I’m so glad we did. Hopefully we can squeeze in another trip or two before we shrink wrap for the winter. 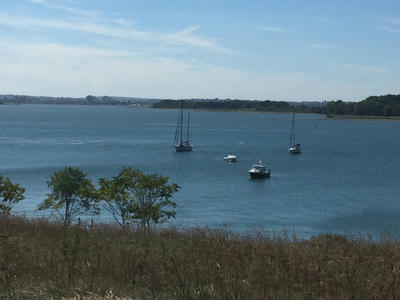