Sunday was, at long long last, sailing day. The past two weeks have been crazy with the end of the school year, a friend’s wedding, final rigging work and re stepping the masts. Add to that tossing together everything we might possibly need for a first sail. Keep in mind, we bought this boat with it on the hard and right after she hit the water we pulled her masts out. We’ve owned Goblin for eight months and our first time sailing her would be a full day trip from Catamut to Boston.

Alex and I spend the night aboard in order to make an early start. The tide would be with us for passing through the Cape Cod Canal starting at about 6 and getting stronger as the morning went on. With my parents watching the kids, we wanted to get underway as early as possible, to make a more reasonable end of the day. Our estimate put the trip at anywhere from ten hours to much much more depending on the wind and how many problems we had to deal with along the way. 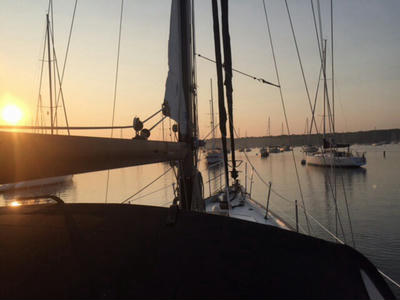 We were up at 5:30 and underway by 6. Alex started with the chart and I was at the wheel. Once we established that the center mark on the wheel had no bearing on actual rudder position, we were on our way. Imagine having no real idea if your steering wheel is pointed straight or not, and worse, straight seems to change dramatically over the course of your drive. That’s pretty accurate for how our steering went for the day. No big deal, we can work with that.

On our way to the canal we played with the auto pilot, just to see what was working or not. After being spun in circles and thoroughly confusing the boat behind us, we determined that autopilot worked, just 110 degrees off. With a solid application of basic addition we could sit back and let the boat steer itself, most of the time. Sudden and unpredictable turns to the right told us that we would be better off steering ourselves for the day. No big deal, we can work with that.

The next discovery, Goblin is a challenge when there is a strong current as her stern tends to swing pretty hard. This became more and more apparent over the day. I’ll blame her swinging part on her shape, part on our inexperience, and possibly part on low hydraulic fluid in the steering system. No big deal, we can work with that. 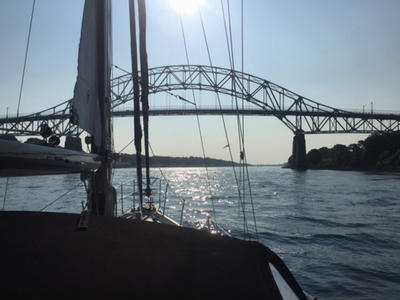 We entered the canal at 7:30 and took turns at the wheel. I called my parents once we had an idea of timing and they brought the kids out to the Sandwich Marina to watch us pass. My aunt Joanne also made it out. We passed her first, to whooping and cheering, and motored on with huge smiles on our faces. Very shortly after we passed the the kids and gave them big waves and smiles. Our own cheering section! 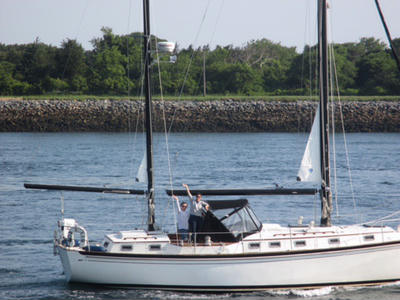 From there we passed out of the canal and into Buzzards Bay for the longest leg of the trip. The water was glassy so we motored along. We had sail up for less than an hour of the trip, just enough to practice. It was sunny, not too hot, and a beautiful day to be out on the water. Alex and I took turns at the wheel, checking the chart, and napping. 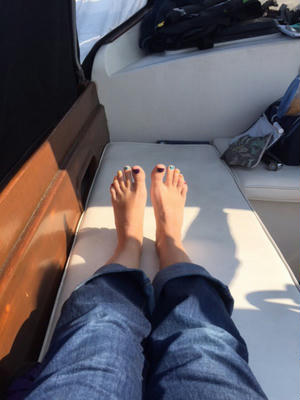 I got my first lesson in navigation. I’m fine with charts when there are channel markers but started the day with no idea how to navigate in open water. I got to practice each hour and my sightings were right on, according to our backup checks with the gps. No surprise, Alex was remarkable accurate as well, but he had a lot more faith in his own abilities at the start of all this. 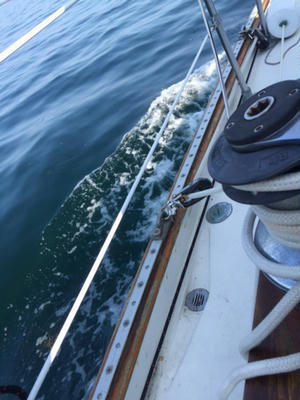 We reached the edge of Boston Harbor around 2:00 as the wind began to blow. Not much, just enough to stir up the water. Traffic was busy with so many boats out for the holiday weekend. Add in the current picking up and Goblin’s steering antics and it was a little exciting for a while.

By three thirty we were in our slip at Constitution, sun pinked and exhausted. The timing worked out perfectly and my parents arrived with the the kids just as we finished securing the boat. We celebrated with dinner out before sending my parents back to the Cape by bus with a thousand thank your for braving kids and traffic to help us out.

From here we switch into the moving aboard adventure. The to-do list contains such fun items as building Kinsley a bed, making sure the refrigerator and stove are working, and emptying the last of our land based possessions, all before the end of the month.

‹ The Waiting Game But Will They Sleep? ›