Despite many, many delays, we got the kids to Catamut for their first visit to Goblin. Climbing a ladder with an almost two year old strapped to your back is entertaining, though nerve wracking. Kins was a good sport about it. Good thing Owen is old enough to climb on his own.

Owen had first declared that he would look at the outside then if and only if he liked it would he climb up and see inside. I guess it’s a good thing the bottom paint looked ok. As soon as he reached the top of the ladder he was off, scampering right to the bow. He knew his room was at the front of the boat but hadn’t really understood that first he needed to climb down into Goblin. “How do I even get in?”

Overall, the kids seem to approve. Owen made it clear that he felt we would be cramped but ok. He loved that his room has so many different storage cabinets. Best perk for him was the step on his wall up to the hatch to the deck. Escape route!

Kinsley clambered over every inch of Goblin she could reach, which is all of them, given her size. Low ceiling due to shrink wrap? No problem when you are less than three feet tall. She giggled and giggled. Watching her run the deck and climb up and down the companionways was fantastic. She’s going to take to boat living without any problem. I love listening to her talking about her Gob-u-lin boat. She manages to turn the name into three syllables and I caught myself doing the same. 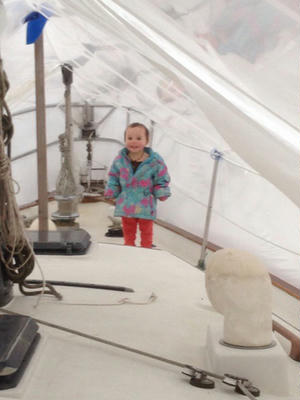